A few months ago, YouTube introduced a new feature in the Netherlands: YouTube Shorts. Short vertical videos of up to 60 seconds that have been given their own prominent place on the platform. Characterized by many as YouTube’s answer to the rising popularity of TikTok and Instagram Reels. The new YouTube feature has been labelled as the biggest opportunity for YouTube creators in years. Now that YouTube Shorts have been integrated in the Netherlands as well as internationally, we are taking this opportunity to dive deeper into this new feature. Which brands already use YouTube Shorts and what are some popular examples include? We offer practical tips, tricks and more.

YouTube Shorts can be thought of as short yet powerful content. But is this feature really that new? With the creation of YouTube in 2005, the platform became popular primarily because of its short, viral videos. With YouTube Shorts, it seems very much that YouTube, in addition to pushing long and qualitative videos, also wants to provide users with the short content they want. The idea of shorts is that you get your message across to the desired audience in no more than one minute. Once a viewer opens the Shorts section on the platform, he or she enters a loop where hundreds of Shorts are recommended one after the other. This is also the difference from normal videos. Shorts are mainly recommended in the YouTube Shorts feed on mobile, while normal videos are mainly recommended via other videos or the homepage of the platform or generate a lot of traffic via YouTube and Google Search. You can see this in the Analytics of a YouTube channel.

Looking at the global YouTube Shorts figures, we see that the demand currently exceeds the supply. This shows a huge growth opportunity for creators, brands and media companies. So far, it is mainly the individual creators who have plunged into making Shorts and thus have a bigger advantage over brands and media companies when they jump in later. (Tubular Labs, 2021) 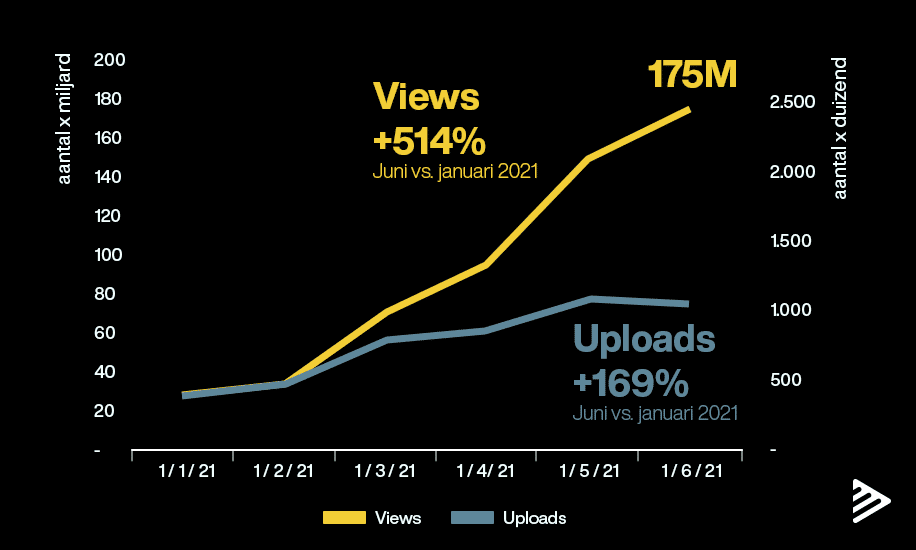 In the Netherlands, we see a similar picture as internationally. YouTube Shorts uploaded by Dutch creators generated a total of 20 million views in the past year and this number is rising continuously. Currently, 83% of the shorts are uploaded by influencers. Together, they receive 71% of the total views on Shorts. Brands, on the other hand, upload only 8% of the total number of Shorts but bring in 22% of the views. This shows that brands with significantly fewer uploads are pulling in a larger share of views. This demonstrates the growth potential of Shorts for brands. 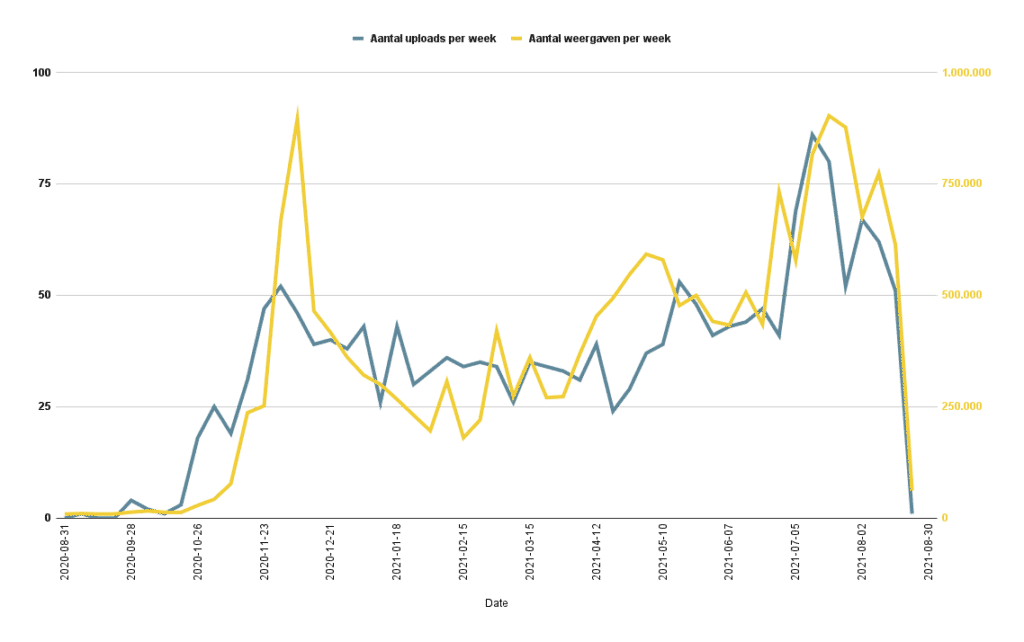 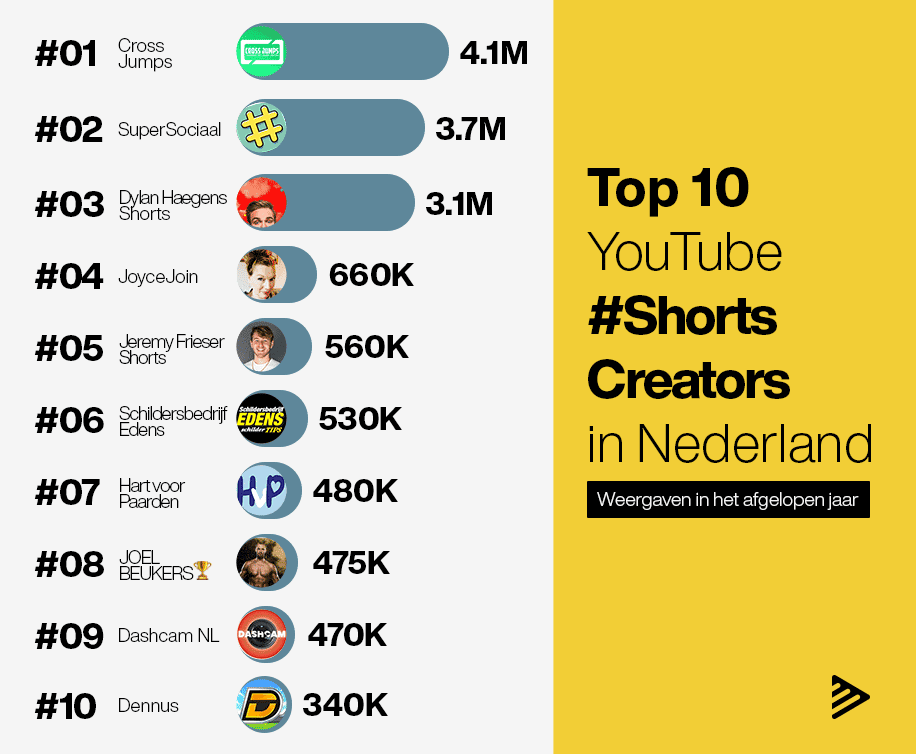 If we look further into the top 10 Dutch Shorts creators, we see that there are no brands present (yet). Also, the popular publishers are still missing in the overview. The presence of ‘Schildersbedrijf Edens’ is remarkable. This winter painter from Apeldoorn has been successfully using YouTube for his business for years. For a few months now, he has been sharing short painting tips through Shorts. This shows how a small company can successfully use this new YouTube feature. Edens offers good scoring ‘help content‘ and also cleverly promotes his longer content that is already available on his channel. Some of the short videos have been viewed almost 100,000 times and the channel now has more than 53,000 subscribers, a number that continues to increase due to his successful YouTube Shorts.

THE PROS AND CONS

So what makes Shorts interesting for brands? First of all, there is now a first-mover advantage. The feature is being pushed by YouTube and more and more users are watching them (views on Shorts increase significantly more than views on normal videos) but there is a limited supply. That is why this is the opportunity for brands to respond to YouTube Shorts now.

YouTube Shorts also generate a lot of extra reach. Reach in views, but especially in subscribers. One of our clients generates about 1,500 new subscribers (!) from an average Short. In addition, the Shorts for the same client rank in the top three best-performing videos of the past 48 hours.

But, of course, there are drawbacks. The main disadvantage is the lack of monetization. If your goal is to make money with Shorts through ads, you’re too early. Only when a YouTube Short is played on desktop, ads are shown prior to it. On mobile, no ads appear prior to and between the YouTube Shorts. Because more than 95% of views are generated on mobile, the yield is therefore particularly low. Chances are that YouTube will change this in the coming months, but right now there is little money to be made with Shorts. To compensate for this, YouTube in other countries offers financial compensation to creators through the Shorts Fund to reward them for the effort they put into creating Shorts. When and whether such a promotional fund will become available in our country is not yet known.

In addition, creating and publishing YouTube Shorts obviously takes extra time and effort. We often see that a channel is only picked up by the algorithm after posting several Shorts and is actively recommended in the Shorts Feed. Because of this (short) lead time you will not immediately see results from your efforts.

If you want to get started with creating and publishing YouTube Shorts here are some tips from practice.

First of all, a very practical tip. YouTube Shorts can be up to 60 seconds long, otherwise, the algorithm will not recognize them as a YouTube Shorts clip. However, YouTube tends to add one or two seconds to the video without your control. This can cause the clip to exceed 60 seconds and therefore not be recognized properly. Prevent this from happening by making the YouTube Short a maximum of 58 seconds long.

TIP #2: A SEPERATE SHORTS CHANNEL: YES OR NO?

What we see is that several popular creators set up a separate channel for their YouTube Shorts. In the Netherlands, we saw this with Dylan Haegens and Jeremy Frieser, among others. Internationally, the MrBeast YouTube Shorts channel is the best-known example. Although these channels are very well viewed, we do not recommend having a separate channel for brands. These popular creators have a lot more subscribers and followers on YouTube and other channels. This allows them to promote a separate channel among their current followers. In addition, maintaining a second channel is something that should not be underestimated. Setting up a successful channel is already difficult, two is simply too big of an investment for many brands. Therefore, consider shorts content as a valuable addition to the current interpretation of the channel, rather than a separate project.

A logical tendency that many brands have is to use YouTube Shorts primarily to promote other videos and campaigns. In that case, Shorts are nothing more than short teasers and promotions for other content. Don’t do this. This will not work. Successful YouTube Shorts must be worth watching to the end in their own right. A short yet complete story within 58 seconds seems to be the formula for success for this new YouTube feature.

For “regular” YouTube videos, thumbnails are an incredibly important element for succeeding. Since Shorts are mainly shown in the mobile YouTube Shortsfeed – where thumbnails are not visible – creating an attractive thumbnail is of little or no importance for generating many views. You can still add the thumbnails nevertheless, but this is only important for recognition and professionalism. Keep in mind that the CTR with YouTube Short videos will always be (much) lower than with the average videos posted on a channel. This is not a bad thing but does bring down the channel average.

Any vertical video of up to 60 seconds automatically stands a chance of being recognized as YouTube Shorts and thus appears in the YouTube Shorts feed. Nevertheless, we find that adding #shorts to the title and description helps it to be picked up by the algorithm faster.

To conclude, for inspiration, we will provide a few more successful creators who are using Shorts.

In the context of: ‘it can be that easy’, creator Dental Digest is the perfect example. This channel provides reviews of – yes – toothpaste. These videos are posted as Shorts and from that moment on are getting millions of views. It is shareable content, which ensures that this creator in no time generated more than 4 million subscribers, and gets millions of views on his videos monthly.

Dashcam NL has been a good scoring YouTube channel since this summer. Not only does regular content score well, but the Shorts content is also being picked up well. By actively focusing on both forms of content, the channel has become one of the ten largest Shorts creators in the Netherlands within only a month and a half. This makes this channel a good example of how one form of content does not preclude the success of the other. The Shorts content does not only generate new subscribers, but also a lot of views. Almost half of the total number of views on the channel are gained through the YouTube Shorts content. These views help the channel to grow and increase the channel authority.

YouTube Shorts are not only useful for viral content, how-to videos can also be easily embroiled in Shorts. Just look at the Crazy Genius channel. In June, this channel posted a video about making a water pump. In three months, this Short alone has generated 50 million views.

PokerStars, the largest poker channel worldwide, uploads several videos a week. When YouTube Shorts were integrated, the brand immediately capitalized on this. The YouTube Shorts showcase well-known “hands” of the world’s greatest poker players. After several weeks of testing, the YouTube Shorts proved to work better in many cases than the regular short videos on the channel. The Shorts generated some 600% more subscribers, compared to similar short clips on the YouTube channel. In the process, the Shorts generated so many views that they automatically made it into the top 3 best performing videos on the channel. Therefore, Shorts are now included in the poker brand’s YouTube strategy.

Entertaining sports content of course cannot be missing from the list of brands that are already scoring well with YouTube Shorts. AFC Ajax appears to be a good example of this. With short compilations of the best passes, most beautiful goals or behind the scenes footage, they show how Shorts can be used successfully for a channel. With relatively few videos, they have managed in a short period of time to secure a good spot among the 20 largest Shorts creators in the Netherlands. AFC Ajax is one of the few brands that does appear on this list.

* Dashcam NL and PokerStars are clients of Team5pm.

The developments regarding YouTube Shorts are still in full swing. The Beta version is being rolled out and constantly being developed, but until then we are eagerly looking forward to seeing how brands will use this new feature. What is certain is that: there are enormous opportunities for brands that start investing in Shorts seriously now. Contact us if you would like to know more about YouTube!