Live streams on YouTube: some people love them, others have their doubts. Yet it has many advantages for publishers and brands. Burgers’ Zoo, for example, attracted a large, international audience with their live streams and accompanying on-demand videos and the Legends of Gaming channel saw a huge increase in watch time as a result of its successful gaming live stream, sponsored by HP Omen. And don’t forget the possibility to buy or sell products directly via live streams. In short, live streams are the way to boost your channel and brand: don’t get left behind!

LIVE STREAMS ON YOUTUBE: BRING YOUR TARGET GROUP TOGETHER

Live streaming on YouTube is possible with YouTube Live. It allows brands and publishers to bring their target groups together in real time. And this does something for your channel. Think of: selling your products through YouTube Shopping, even more connection with your audience and don’t forget the (probably) most important: a live stream gives a gigantic push in views and watch time on your channel. Examples of live streams are press conferences on current news, but also hosting events like sports matches or games. Through a live stream and the accompanying chat, brands and publishers can communicate live with their target group.

Does YouTube have a permanent place in your marketing mix? And are you a brand or publisher that offers relevant live streams? Then it’s a shame not to do it! Why? Live streams provide about 40-800% increase in watch time on the platform. This of course also has to do with the length of the live streams. Live Streams are generally much longer than your regular content. They can last for hours. This ensures that the average watch time on your channel increases considerably. And the YouTube algorithm loves watch time. Watch time is still the most important YouTube metric, so this influence trickles down to the rest of the funnel (CTR, views, viewer retention etc.). 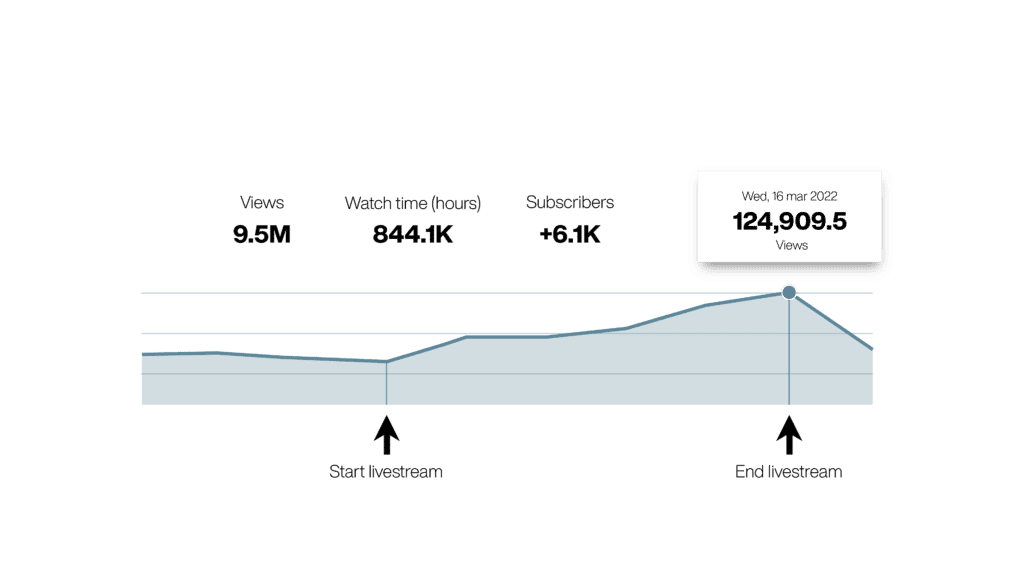 #2 A push for new audiences

As mentioned before, live streams generate extra watch time. And this affects how often your channel is recommended by the YouTube algorithm. A channel that generates a lot of watch time is a channel that is then pushed more towards a wider and therefore new audience. With an increase in views on regular videos and hopefully new subscribers as a result. 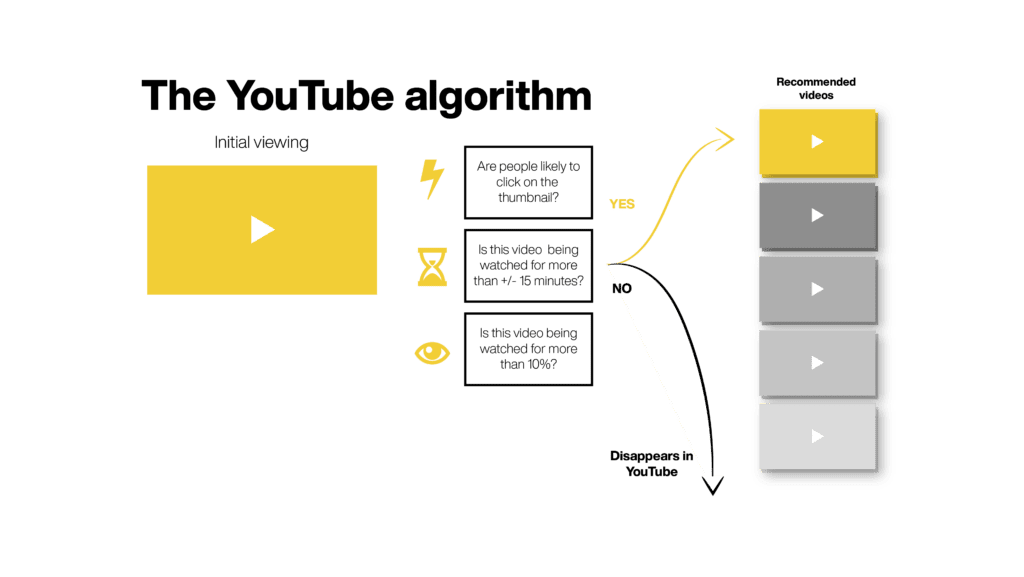 #3 More interaction with your viewers

Besides watch time, engagement is an important metric for a channel. And let a live stream be the way to build a real community with your audience. With the Live Chat function to the right or below the live stream, you as a brand, can communicate in real time with your viewers. Think of asking questions or asking for opinions through polls. These interactions are all counted in the engagement on your channel. The polls are only visible during the live stream itself.

One of YouTube’s other spearheads in the new year is the further integration of video, live streams and commerce: Video Commerce. This means that it will also be easier to buy displayed products directly via live streams. As the MD of YouTube Shopping, Bridget Dolan, puts it: “We already have a tremendous amount of shopping content. How we make that shoppable over time is our next foray.” So YouTube is going to make YouTube Shopping more prominent. As soon as a brand takes advantage of this new feature, it will provide an extra push to the channel. 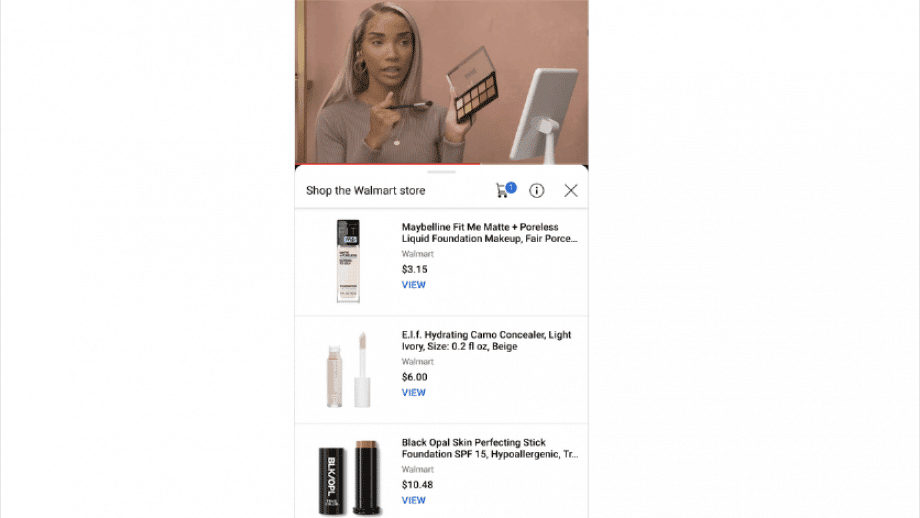 The NOS is a perfect example of a publisher that has cleverly used live streams on YouTube. During the COVID period, for example, the news medium ensured that (young) viewers who were on the road or unable to watch the press conference on television for some other reason, were still up-to-date on the new measures. The best performing (covid) live stream on the YouTube channel attracted some 750K viewers. All these live streams have been compiled into a playlist, which has currently generated over 100K views alone. 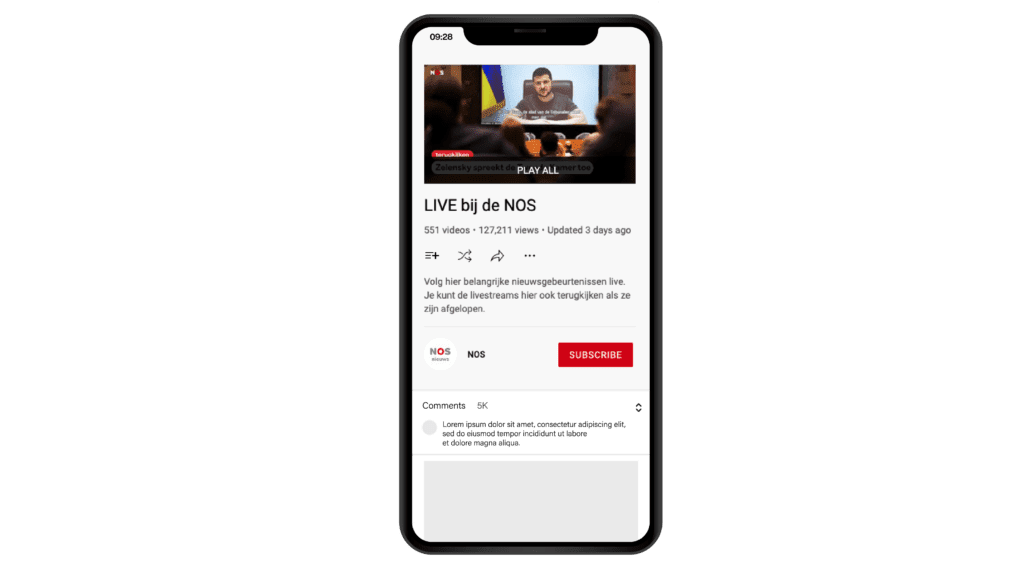 Another example of the effective use of live streams on YouTube is the YouTube channel of Formule 1. Of course VIAPLAY has the rights to broadcast F1, but all extra content is live streamed on YouTube. This way, pre- and post-race reviews are broadcasted on YouTube, but also the well-known YouTube formats like ‘F1 drivers react to’. YouTube is thus an additional distribution tool to create a buzz around important races. A good way to bring major events to the right and widest audience. 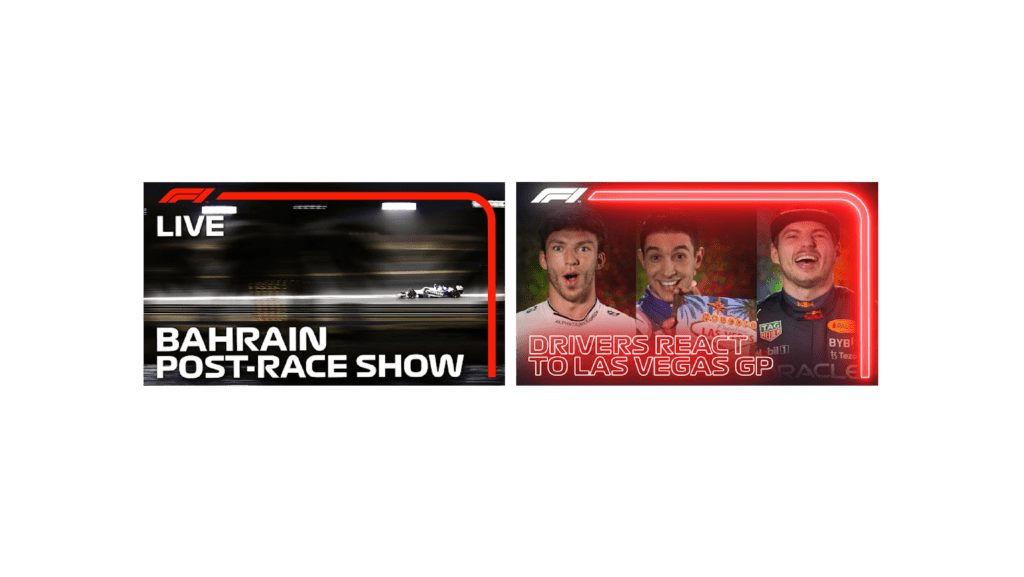 The most famous poker brand in the world also uses the live stream function on YouTube. During the lockdowns, they were unable to host live poker events. Therefore, PokerStars live streamed a lot of archive content during lockdowns (e.g. European Poker Tournaments RETRO ’16, ’17’, ’18 and ’19). This resulted in a big push in new subscribers (+15% compared to the period when they had no live streams). As the measures in many countries disappeared, the poker brand was able to host live events again last month. For example, in March they started with EPT Prague, where all major tournaments were visible on the Global, French, Spanish and Brazilian PokerStars YouTube channel. For the Brazilian channel for example, the live streams resulted in a 27% increase in views, 109% increase in watch time and 65% increase in subscribers.

In collaboration with Legends of Gaming (KPN), HP Omen held a live stream with major influencers around the Christmas period last year. OMEN took centre stage by highlighting various OMEN products, unboxing them and then giving them away as actual Christmas presents. Three legends played on OMEN set-ups throughout the stream to further highlight the brand. There were gifts to be won throughout the live stream. A reason why many viewers kept watching. The result? An above-average amount of watch time (12.3% vs. 9% with a length of about two hours!). In addition to the increase in watch time, more than 8,000 reactions to the live stream were received in the live chat.

Burgers’ Zoo uses YouTube Live to share important zoo events with the public. Births, medical procedures, removals: these are all part of daily life at the zoo. For various reasons, however, these events often take place behind the scenes, away from the public.

Therefore Burgers’ Zoo decided to stream the births of a rhino and a manatee on YouTube. The streams attracted an interested, international audience to the channel. The on-demand videos of the births, which came online afterwards, were on average better viewed than other videos on the channel. 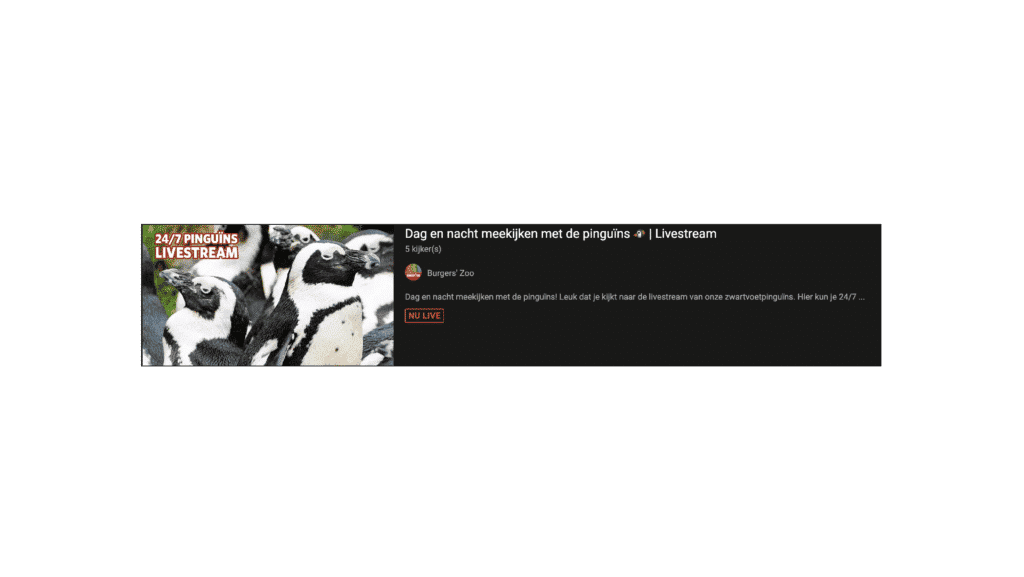 CONCLUSION: LIVE STREAMING ON YOUTUBE ADDS VALUE TO THE RESULT

In general, live streaming on YouTube ensures a considerable increase in views, watch time and impressions. In addition, you build a real community by going live once in a while. If the main goal of a brand is customer loyalty, then live streaming certainly adds value.

Would you like to know more about what live streaming via YouTube Live can do for your brand? Then get in touch with us.

WANT TO KNOW MORE ABOUT HOW TO GROW YOUR YOUTUBE CHANNEL?

We know that YouTube is the #1 entertainment and education platform. But it is also the platform on which a video easily disappears. In fact: 80.2% of all Dutch videos on YouTube achieve no more than 5,000 views. As a publisher, how do you make sure that you’re among the remaining 19.8%? Our Lead Growth Yara tells you all about it in her blog on the importance of distribution. Read the blog about the importance of distribution here.