Like many brands, do you want a more youthful brand image? Do you want to dust off your brand and win over the Gen Z’ers and Millennials? The best way to reach this target group nowadays is through their love for gaming! Even if you don’t sell keyboards, monitors or energy drinks. But how do you really win the hearts of gamers? Through the right gaming video content! I deliberately say ’right’, because if you do it… do it well.

8 in 10 Gen Z’ers and Millennials are gamers (Newzoo, 2021). In other words: only 2 in 10 say they are not a gamer. For many, gaming as an entertainment form is as big a part of their lives as music, sports, or movies. People under the age of forty spend an average of 7 hours a week gaming. 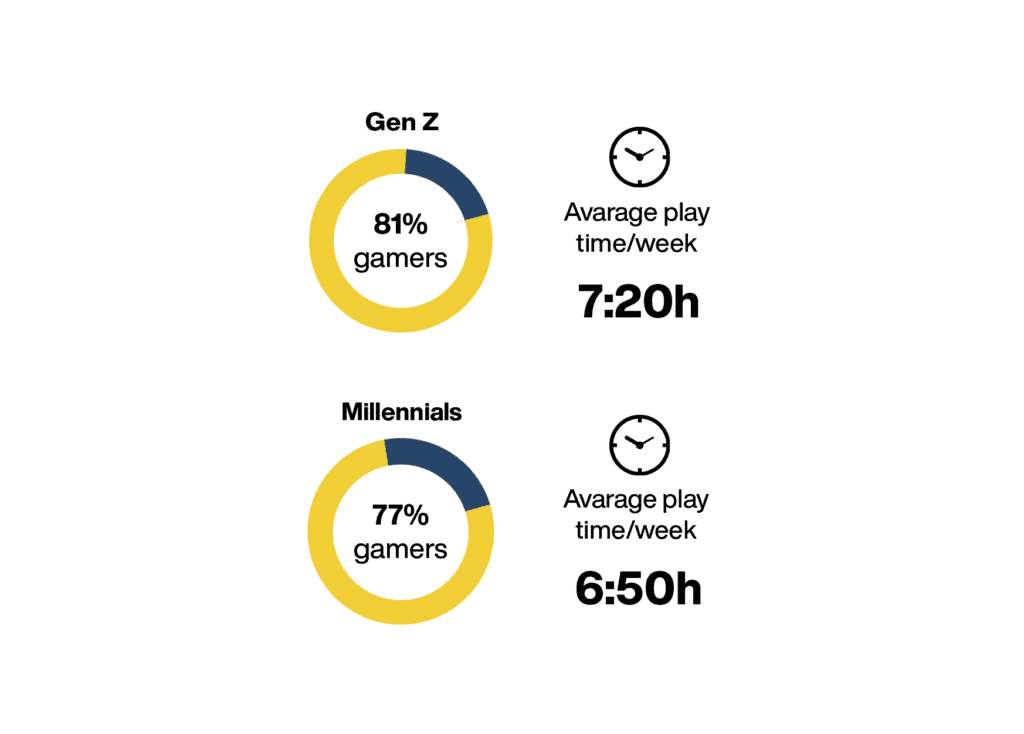 Gaming is mainstream. Among Gen Z’s, YouTuber PewDiePie is better known and loved than Elon Musk (Morning Consult, 2019) and in 2020, the global game industry brought in more money than the music and film industries combined. (Nasdaq, 2021) This was further reinforced by lockdowns: while Lowlands and Pinkpop were cancelled, the gaming worlds of Animal Crossing and Warzone opened. Gaming is thus more relevant than ever.

If you want to raise your profile as a brand in the gaming world, you can literally buy yourself into a game, for example with a skin in Fortnite or with a billboard in FIFA. However, there is another, more accessible way: integrating yourself as a brand in a natural way into video content around games. Gaming yourself and watching gaming go hand in hand for young gamers. More than ⅔ of Gen Z’ers and Millennials play games and watch videos of others gaming (Newzoo, 2021). And if you’re thinking right now, ”watching someone game, what’s the point of that?” – then think about why you watch a soccer game or Miljoenenjacht. Basically the same thing, but with better graphics. 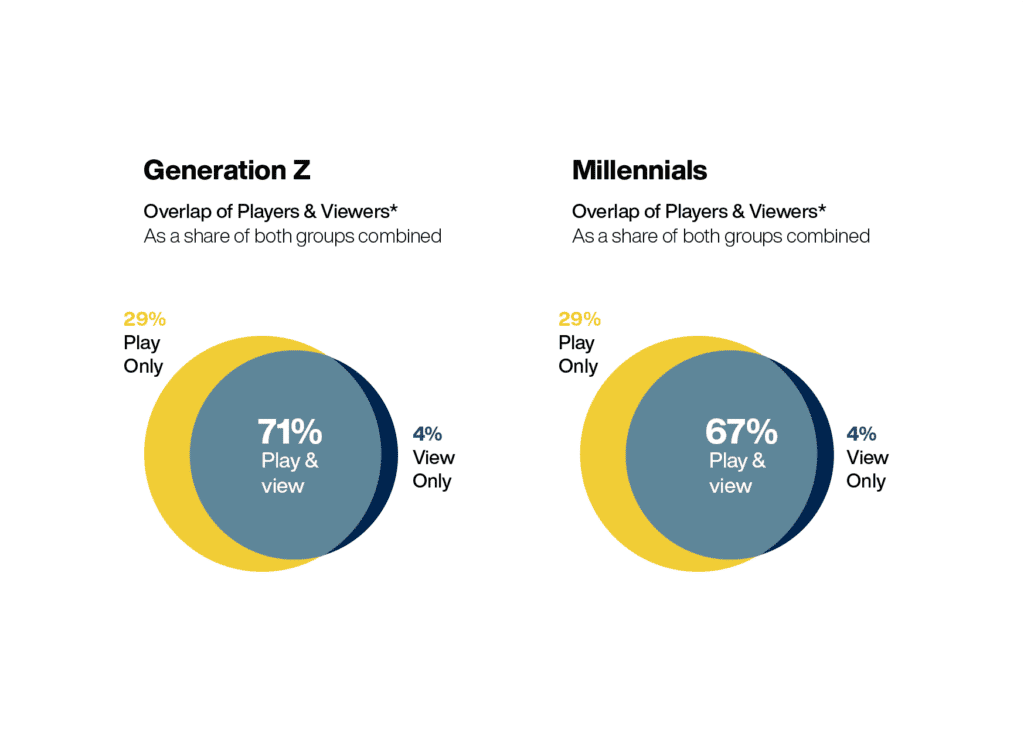 Within gaming video content, you have to distinguish between ”esports” and ”casual gaming”. In esports, just like in normal sports, you watch the best of the best compete against each other in professional teams. Online on Twitch or YouTube, or offline in a full stadium. In games like League of Legends or CS:GO. In casual gaming content, famous people make entertainment content with playing games. Live, on demand, alone, or together, and on all platforms. Often competitive as well, but beating your (on- or offline) friends will do.

The story in esports is clear: who is the best? The story in casual gaming content can still go either way. And it is this malleable entertaining content that offers brands a great opportunity to play a role in the community. Because even brands that want to associate themselves primarily with the fun in gaming can do so here. Want your brand values to rise among the large gamer audience? Then create content that they love and watch for a long time. Does that work? Then you’re well on your way and you can start to naturally incorporate your brand messages. Looking for examples of brands that have done this successfully? Look no further.

In the Netherlands, KPN is the main sponsor of the major casual gaming platform Legends of Gaming (LOG). In LOG, the best and biggest YouTubers and streamers compete in all kinds of game battles and challenges to determine who is the ”Legend of Gaming”. Essentially a tournament, but all about the fun. Almost 6 years ago, the brand thus brought together everything that makes YouTube gaming on one new YouTube channel. The best gaming influencers, the right director, a young and creative editorial team and video editors with a lot of hours of gaming content on the counter. With this, KPN has made a serious impact with Gen Z’ers and Millennials.

LOG became a household name in the Netherlands with annual seasons, spin-offs and side series. LOG currently boasts over 1 billion minutes of viewing time, 150 million views and 540 thousand subscribers. And all that organically, with KPN as a proud partner from day one. LOG’s success story resulted in a success story for KPN, with exceptional increases on brand values and preferences in the critical gamer target group.

What makes LOG such a success is the idea behind it: content first. LOG is made for gamers, by gamers. Content driven by passion. Gaming viewers are critical, ruthless and will see right through your commercial message. To appeal to the gamer, you have to let a gamer do the talking. The fact that you once played Sims or Rollercoaster Tycoon does not make you a gamer. Hook up with the right people who know what they are talking about. Every euro you spend subsequently becomes worth more that way.

To make good gaming content, you need gamers in all phases of your process: from concept development to casting and from production to distribution of your content. When you first create gaming content, you encounter many challenges. You need to know what content and tone-of-voice will resonate with the community. How to avoid missing the mark in a critical target group where you can easily come across as ’commercial’ or ’fake’.

Your montage is more important than ever and is only safe in the hands of a real gamer. Gaming montages are packed with quick edits and humor. If you do this well, then your editor will also become known to the public. In addition, you can’t just open a can of influencers. The chemistry and group dynamics have to be right, but they have to feel new and surprising to the viewers. You have to know the names and be aware of friendships or tensions. You need to know which influencers know and play which games. And do you work with game hardware? Then you need to set up your production accordingly. There’s a lot involved here, but if I could give you just one production tip: frame rate. Lock it at 60 fps, progressive and with a high bit rate. You have no idea what I’m talking about? Indeed, then you need a gamer on your team.

If you create content that your gaming target group likes to watch, then you can bet on branding. What message do you want to convey to the viewer? What product do you want to sell or how do you want the target audience to appreciate your brand? KPN’s goal was to increase brand preference and consideration among viewers.

Clear in-video branding goes a long way: KPN facilitates LOG and that makes KPN cool. In addition, KPN directly links to the best moments of Legends of Gaming, through the monthly compilation format #KPNTOPPLAYS. Viewers shape this top list by indicating their favorite LOG moments with a comment using the hashtag. After 6 years, the term ”KPN Top Play” has thus become synonymous with an epic or hilarious gaming moment.

In addition to in-video branding, KPN also uses custom branded formats to convey different propositions to Gen Z’ers and Millennials. Take KPN Fiberglass. Fiberglass facilitates the ultimate gaming experience with lightning fast, reliable and stable internet. Fantastic of course, but how do you bring that into focus in a visually attractive way? LOG did this by connecting KPN Fiberglass and ultimate gaming in a makeover format called ”KPN Next Level Game Room”. In this format, a viewer’s room is completely transformed into the ultimate game room. The participant will also receive a fast and stable KPN Fiberglass connection. In this series, being connected to KPN’s fast fiber optic network equals a complete mega-upgrade of your gaming experience.

Another honorable mention: IKEA. To promote their new gaming line they had four of the largest Twitch streamers in the Netherlands live stream from their new showrooms for an evening. Four gaming rooms side by side. They streamed on their own Twitch channel and played against each other in various party games. The new gaming furniture was raffled off among viewers of the winning streamers. This way IKEA got the gaming viewers together and with their favorite streamer online to their showrooms.

MORAL OF THE STORY

You can open a can of influencers, have them play a random game in front of the camera and stick your logos around it. But by starting from the content and producing through the eyes of a gamer (content first), you create unique content that gamers watch for a long time. In this way you show that you understand the community and know what is going on. By contributing to the gaming community with strong and original content and being part of it you conquer the hearts of the Gen Z’ers and Millennials. You become credible and people listen to you. And that’s the time to do your story.

Good. After reading this article, would you like to speak to a gamer who knows how to conquer the gaming community with your brand? Then get in touch with us!